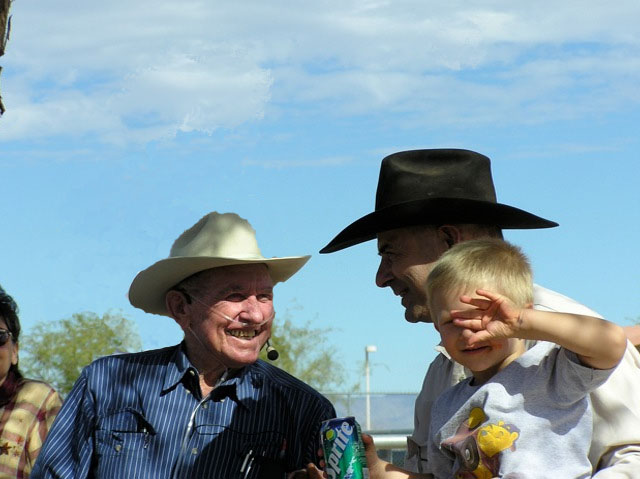 Anyone ever knowing Ray Hunt has thoughts on Ray, to my knowledge all favorable, even from those he might have chastised for something they did to a horse.  He would make them understand “if the shoe fits wear it”.

This is the thing I admired about Ray.  He was about putting out the effort, taking responsibilities, and not making excuses.  He would work hard to fix it up so you could find it; he was never about bringing recognition to himself.  Sometimes I would think his answer was not clear to me, but now I realize anything more added or subtracted to his answer may have led me to a wrong conclusion.  I’ve learned to respect this humbleness of knowing that if Ray perceived you weren’t satisfied, he would never add or subtract just to earn your praise.  He understood the need for time and experience.  Yet Ray never belittled you or made you feel insignificant, as you worked trying to figure out the things you did not know.

As I look back on my life and my relationship with Ray, my biggest regret is that I didn’t meet him earlier. However, I believe my life has been guided by the Holy Spirit whom has constantly put me in places and brought his people through my life at times where I could best utilize and absorb the lessons.

Ray would remark “ I don’t know how smart the horse is, but I do know he feels, thinks, makes decisions, changes his mind, he gets hot, he gets cold, he gets sick, he gets well, and if you cut him the same thing runs out of him as you and I life’. This may be the most significant thing that we are dealing with, is life.

Ray often referred to it as being about life, taking responsibility, and working on ourselves more than the horse so we could have more to offer the horse.  After chewing on this all these years, I’ve decided it is not about me and what I desire for my horse, but what do I have to offer the horse.

Ray has helped me understand that the horse has been able to survive on their own without any dependence on us when we make them dependent on us.  No matter what we think we know or understand about the horse, we have more to learn from them than they have to learn from us.

With this understanding of life, accepting our responsibilities, working on ourselves, recognizing that they do feel, think, make decisions, and change their minds, they become a good barometer of how well are we adjusting to fit the situation.  Helping us to develop the feel, timing, and balance it takes to get our idea’s to become theirs.

As much as Ray has helped me to learn about horses and my responsibilities to them, I’m not intending to make this about religion, but as Ray says it’s about life.  My being a man of faith I have found the best resource for studying life and self is the Holy Bible.  Building relationships with horses has helped me to understand this.

I have used many of Ray’s quotes, sayings, and philosophies to relate my thoughts on Ray.  I don’t think my thoughts are unique. Anyone that has met and studied Ray’s ideas has heard him say these things and have similar thoughts.

At one of the earlier clinics that Ray was holding, that I attended, there was a very perceptive lady that could see Ray’s talent and the impact this would have on the industry asked, “Where do you see this understanding going and what are your hopes for the future”. Ray’s reply was simple that someday there would be a little girl riding her horse that was performing with harmony and softness and that when asked where did you learn how to achieve that?  Her answer would be “I never knew any different”.

As you can see Ray’s ambition was not for himself, but for the horse and the absence of an agenda.

For all the good horsemanship Ray’s teaching has inspired none of us has just what he had.  We either lack the experience, talent, or knowledge; have tried too hard to show off our talents, or to bring recognition upon ourselves.  All of us fall short. I think for those of us that have studied Ray’s teachings, our only hope now is to continue to realize our responsibility and work on self, sharing insights we have learned from Ray with each other.

For those of you that never met or knew Ray, my sympathy is with you. You have missed a man with great understanding and passion for the horse and life.

I hope you do read his book, watch his DVD’s, and seek insight from any of us that you can; but be sure that from any other source it is a trickled down version of the image Ray had of the little girl who’s horse rode with such harmony and softness that when asked how did you achieve this harmony with your horse she replied “I never knew any different”.

5 Responses to “Thoughts on Ray Hunt”